Henry and his friends were so excited about reviewing these Wagg Tasty Bones Dog Treats that they were literally jumping for joy!  But before we let them and their taste buds loose on these chicken and liver treats we had a good read of the packaging to see exactly what had got them so excited!
I was particularly impressed to see that these treats had no added sugar (Henry is already sweet enough!), artificial colours or flavours.  With Skipper still being a pup he is already hyper enough with-out adding any artificial colourings into the mix, so that was reassuring to see.  That they were enriched with vitamins and minerals was an extra bonus, making these a delicious and healthy treat for all three dogs. Wagg Tasty Bone Dog Treats
Right lets get to the all important taste test!  Tasting today were Henry, Bandit and Skipper.  Being the fussiest of the three I was especially interested to see what Skipper would make of them.  The treats themselves were a good size - not too big and not too small.  An ideal size to use as a reward for being good or during training sessions. 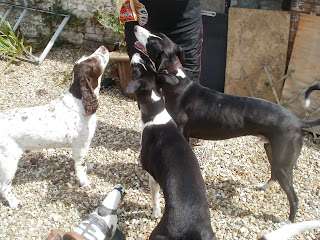 All three dogs were obviously impressed, especially Bandit who gobbled his up quickly and asked for more.  His taste buds were so excited they had him spinning round and round, waiting impatiently for his turn to try the next treat!  Meanwhile Skipper, who's usually fussy, was jumping up and down with joy! 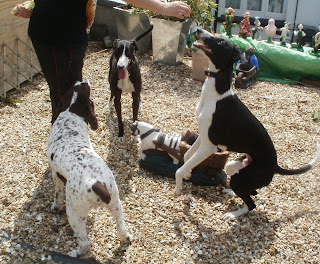 As you can probably see from the photos, our gang gave these oven baked treats a resounding thumbs up (or should that be 'paws' up!).  At only £1 for a 150g packet these are a real bargain, and we would highly recommend them.
Please check out the Wagg website where you can find out about the other delicious treats and complete dry dog foods in their range.
Dog Food
Posted by Unknown at 08:32