Since we adopted Henry he’s always had problems with his nose getting dry and sore.  As you can see from the photo below it gets very dry and looks ‘warty’ in appearance.  It can get quite sore for him sometimes too, as he tries to rub at it with his paw.  So we were pleased when the lovely people at Nurtured Pets sent us some NurturSalve to try. 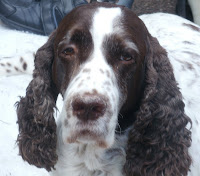 The skin on the top of Henry's nose gets very dry - perhaps that's why he looks miserable in this photo! 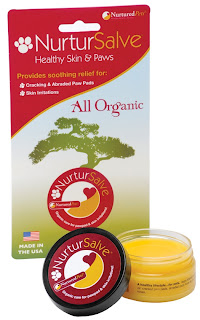 NurturSalve is a unique application developed to soothe dry noses and cracked paws in dogs.  It contains beeswax, sunflower, jojoba and eucalyptus oils, plus extracts of calendula, comfrey root, Echinacea, chaparral, myrrh and benzoin gum.  Used as a healing balm NurturSalve will protect and promote repair of minor abrasions, insect bites and skin irritations.
When we first tried to use the NurturSalve on Henry’s nose he wasn’t too keen.  I’m not sure if it was because it has a fairly strong (but pleasant) scent from the various essential oils used, or just because he didn’t want us to touch his nose.  However he was soon bribed with some tasty treats and we have applied it daily for a few weeks. 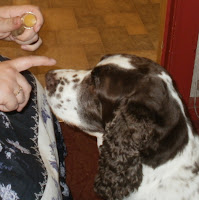 After just a few days we started to notice a difference in the skin on the top of his nose.  Because the top of his nose was dry and cracked it looked almost white in appearance, rather than the normal brown colour on the rest of his nose.  It certainly looked healthier and must have been more comfortable for Henry.
Weeks later the improvement is now even greater, the skin is less bumpy and warty and looks a lot healthier and more ‘normal’.  We were really pleased with the product; it made a big difference to the health of Henry’s skin.  I’m not sure how well it shows up on this photo, but both the appearance and feel of Henry’s nose is much better. 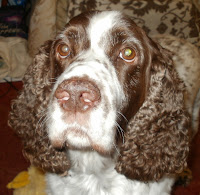 This would make a great standby product to keep in your doggy first aid kit.  A little goes a long way; you only need to use a small amount, so a pot lasts a long time.  I know a lot of older dogs that suffer from cracked paws, so I will be recommending this product to them (or to their owners anyway!)
For more information about NurturSalve and other products in the Nurtured Pets range please visit www.nurturedpets.co.uk
Posted by Unknown at 08:06