We were told he had a few hours to live - a year later Dad's still going strong!

Today is the first anniversary of one of the worst days of my life.  Dad was rushed into hospital suffering from septicemia, caused by a Strep infection.  The next few days and weeks were a total nightmare, we were told on four separate occasions to prepare for the worse as Dad wasn't expected to last the night.
The infection attacked most of Dad's organs, causing his lungs to collapse and a heart attack.  The infection ate away at his leg leading to several operations.  On paper, he shouldn't be here.  It's thanks to the wonderful care he received in Intensive Care and other wards, as well as his bravery and fighting spirit, that he is here to tell the tale.
He has spent much of the last year in hospital.  In March he was allowed out of hospital to attend my brothers wedding.  Two days later he was back in the High Care Unit having suddenly deteriorated.  Again we were told he wouldn't make it.  But after having his leg amputated at the end of March he has progressed really well and has now been home for a few weeks.
Dad I love you. 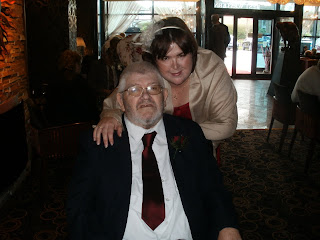