As the warmer months disappear it seems only fitting that Battersea Dogs & Cats Home waves goodbye to its very own Summer. Staffordshire Bull Terrier Summer has finally found a new home in East Finchley, having spent eight dog years at the animal rescue. 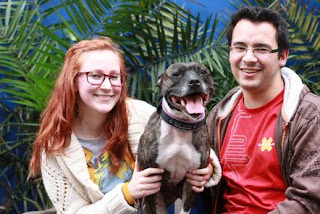 Four year old Summer arrived at Battersea in July 2010 as a stray, after she was found by a dog warden in Lewisham. Her long stint in kennels made her the second longest-standing resident at the London-based charity. However, after 421 days she caught the eye of Daniella Gouveia and Daniel Simoes from South Africa, who now live in East Finchley.

Daniella explains: “We both love dogs and have always had lots of dogs around us in South Africa. We wanted to give a home to a dog who really needed it, and looked at all the dogs who had been at Battersea for a long time. We fell in love with Summer, as she is a fantastic dog. She knows lots of commands, so I don’t understand why no one picked her sooner, but we feel lucky to have her.”

Summer is now looking forward to a life of exploration with Daniella and Daniel, who plan to get her a dog passport and travel with her around the UK and to France. “We are going to get her lots of toys, and kit out the house for Summer,” Daniella says. “We have a lovely park near us, so hope to give her a great life.”

When Summer arrived at Battersea without a tag or microchip to reveal her identity, she was named by Battersea staff, and was originally called Froglette, because she was as bouncy as a baby frog. Her name wasn’t very popular, so in a bid to find her a more ladylike title, Battersea ran a competition among supporters, with Froglette herself choosing her new name of Summer.

Daniella says: “We love Summer, so would have taken her no matter what her name was, but Summer does suit her. She is just perfect.”

Battersea Rehomer Jay McGuiness adds: “Everyone was so pleased to see Summer go to her new home, and lots of staff and volunteers came to say goodbye to her. We hope she has a wonderful new life with Daniella and Daniel in East Finchley.”
Posted by Unknown at 11:38