This is the final part of our British Cheese Week feature, where Henry and I are celebrating all things cheese (if you hadn’t guessed, we’re both cheese addicts!).

What’s your favourite cheese?  Cheddar? Stilton?  Brie?  Well according to data collated by Sainsbury’s, Cheddar is the overwhelming favourite.  As British Cheese Week gets underway, new data from Sainsbury’s has revealed that nothing quite creams the nation’s cracker like a chunk of our native Cheddar, which accounted for nearly half (45%) of all cheese consumed by Sainsbury’s customers in the last year.  But, the British palette appears to prefer a more sophisticated taste as we spend double the amount on mature and extra mature Cheddar compared with less aged varieties.
In total, the UK’s cheese fanatics have gorged their way through more than 66,000 tons of the stuff in the last 12 months alone – the equivalent weight of around 825 Boeing 747 planes, 6,947 London buses or 16,500 adult elephants.
Overall, Britain spent more than £344 million on cheese in the last year alone. The South East leads the way in the cheese feast, accounting for nearly £80 million of the total expenditure - nearly £10 million more than nearest rival London.
Sainsbury’s customer data has revealed the nation’s cheese (leader) board:
The Great British Cheese Sales Leader Board
1.       Cheddar
2.       Parmesan
3.       Red Leicester
4.       Mozzarella
5.       Brie
The info graphic illustrates the proportion of total spending on our top five cheeses: 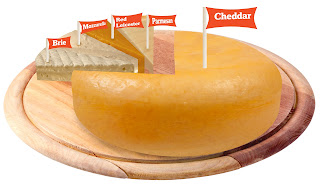 Despite a seemingly strong appetite for cheese, Brits’ knowledge of cheese produced in the UK is surprisingly poor. Less than one in 20 respondents (4%) in a recent consumer poll knew that the UK produces over 500 varieties, while nearly half (46%) think we produce 30 or fewer.
Despite the popularity of camembert, mozzarella and parmesan amongst Brits, little realise a large portion of the French and Italian flavours are now produced in the UK.
·         56% of Brits didn’t know we produce Mozzarella in the UK
·         51% didn’t know that Camembert is produced in the UK
·         Nearly half (47%) didn’t even know that we produce creamy Somerset favourite, Brie
Anna Townsend, Sainsbury’s cheese counter buyer said:  “It’s great to see that our native cheddar still holds top spot on the nation’s cheese boards. With so many wonderful varieties being produced across the UK, including everything from stilton to mozzarella, it’s reassuring to know that the humble dairy farm is one British establishment that will be cherished for years to come”
Nigel White, secretary of the British Cheese Board said: “The British public has been obsessed with cheese for centuries, and with over 700 named cheeses made on British soil, it’s no wonder! King Henry II proclaimed that Cheddar cheese was the best in Britain, and while we know our Cheddar is the best in the world, there really is no excuse for not trying one of our many other styles of cheese on top of your normal Cheddar choice. With so much on offer, it’s really no surprise that we plough through such vast proportions of the stuff on a yearly basis.”
Sainsbury’s Taste the Difference Wookey Hole Cheddar, a cave-aged Dorset cheddar made using a 400 year-old technique, was recently voted ‘best cheese in the world’ at the International Cheese awards.
And to finish our cheesy feature, here’s news of a really fun project by Primula who have celebrated British Cheese Week in an unusual way!
Primula showcases their uniquely cheesy portraits to ‘celeb-rate’
British Cheese Week 2011 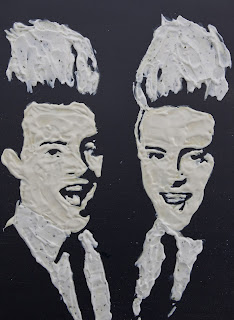 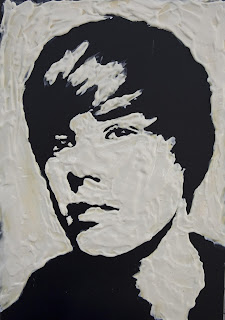 Last week shoppers at the N1 Shopping Centre in Islington, London were treated to Justin ‘Brie-ber’ and ‘Ched-ward’ immortalised in the nation’s favourite squeezy cheese.

The team at Primula has marked this year’s British Cheese Week (running 24th Sept – 2nd Oct) in their own uniquely cheesy way by unveiling their first ever celebrity portrait collection – painted entirely with Primula Cheese spread.
Food artist Faye Halliday rose to Primula’s challenge when asked to recreate some of the world’s most famous faces – to ‘un-brie-lievable’ effect! She was also painting during the day to show shoppers just how these ‘in-cheddar-able’ portraits are created.
Other portraits included Barack ‘ Edam -a’, Marilyn ‘Mon-zarella’ and Boris ‘Jarlsberg’ – London ’s Big Cheese!

Craig Brooks, Marketing Director at Primula, comments: “We’ve always known how versatile Primula Cheese spreads are, which is why our products are much loved by consumers across the country. This gave us some food for thought, so we decided to really put its versatility to the test and have a bit of fun with our Primula celeb portraits. And what better time to share the amazing results than at the start of British Cheese Week. We’re sure that consumers will agree that they’re a very ‘gouda ’ likeness to the celebrities!”

Lynne Glover, the N1 Centre Manager said: “Here at the N1 Shopping Centre we love to host a variety of fun events that our consumers can really enjoy. We were delighted to host this unique activity, which also helped to launch British Cheese Week; promoting the country’s best cheeses. It was truly fascinating to watch the cheese artist in action!”
For more information on Primula please visit www.primula.co.uk
Posted by Unknown at 11:16