A cat that was a faithful companion to his young owner during his dying days has had to be put to sleep after being shot. ‘Ben’, a Maine Coon Red Tabby, was bought for 12-year-old Henry Dancer after he was diagnosed with terminal cancer Osteosarcoma in November 2009. 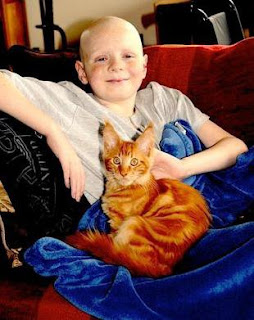 Henry’s mother, Jane Nattrass, said: “Ben brought great joy to Henry and, whilst he did not know the severity of his illness, he got a lot out of having Ben around in his final months. He'd always wanted his own Maine Coon to name as he pleased.
“Sadly we lost Henry in November 2010 but having Ben as part of our family has helped us move forward.
“He had such a great character and enjoyed going for walks with us and our other cats. He was very special to us. We know he’ll be up there sitting on Henry’s lap again.”
Ben went missing from home in the village of Cornsay, Durham on Friday 19 August and dragged himself back at around 6.30am on Sunday 21 August. He was taken straight to the vets and X-rayed but was badly injured and was suffering from advanced fly-strike which couldn’t be treated. He had to be put to sleep to end his suffering.
He had been shot with a .22 rifle - a weapon which requires a license - most likely on Friday.
Jane said: “Ben would only normally go out for an hour or two so we knew something was wrong and went searching for him, but just couldn’t find him. 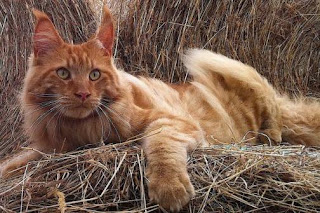 “We lost another cat about five years ago, she just never came home, so we are grateful that he managed to get back to us. If only he’d been able to reach us sooner he might have survived.”
Causing unnecessary suffering to a protected animal such as a domestic cat is an offence under the Animal Welfare Act 2006 and carries a maximum sentence of six months in prison and/or a £20,000 fine.
RSPCA inspector Kaye Smith is investigating: “This is such a heartbreaking story. What happened here caused a great deal of suffering to this cat but also to the family that he was an extremely important part of.
“Cornsay is a very small and close-knit rural community – there are only 18 houses and two farms in the village - and we’re appealing for anyone who knows anything to get in touch.

Email ThisBlogThis!Share to TwitterShare to FacebookShare to Pinterest
Labels: cats