When Henry arrived at the rescue centre just over three years ago, he had badly infected ears. The vets thought that he had had this problem for several months, if not years, and it had never been treated.  Since then he has had recurrent infections, and he also has problems with a skin allergy causing itchy ears. Spaniels, and other dogs with floppy ears like Setters and Basset hounds, are prone to ear problems as floppy ears trap moisture and air within the ear canal; making it an ideal place for bacteria and yeast to grow.  Keeping Henry's ears clean is important, as if there is too much debris in the ear canal this can also cause bacteria to grow and cause infections.  Mark & Chappel recently sent us a bottle of their Ear Cleaner for Dogs & Puppies to try on Henry, and we've been using this for the last few weeks. 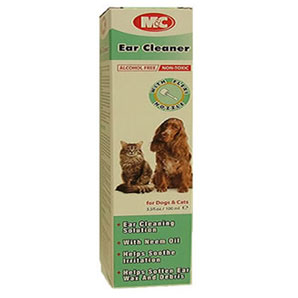 M & C Ear Cleaner for Dogs & Puppies
The ear cleaner arrived at a great time as Henry had just started to begin scratching at digging at his ears, we weren't sure if this was the start of an infection or if his allergy was flaring up again.  We decided to try the ear cleaner for a day or so, and if it got worse or persisted to cause problems we would take him to the vets for his usual treatment - a steroid injection and ear drops.  If possible we wanted to avoid the steroids as it's not great for dogs to have them too often - and they make him even greedier than normal!
The M & C Ear Cleaner is an alcohol-free ear cleaning solution with neem oil.  It helps soothe irritation and helps soften ear wax and debris.  Neem oil possesses antibacterial and anti-fungal properties which help to promote healthy skin.  The ear cleaner also contains boric acid, which is an antiseptic agent that reduces the risk of infection on broken skin, and malic acid which is a topical wound cleanser that also acts as an exfoliator. 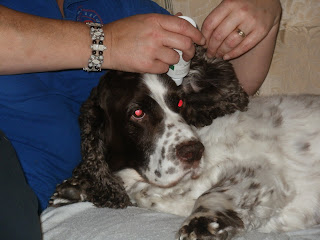 I found the ear cleaner easy to use.  It has a soft, flexible nozzle, so it was gentle on Henry's ear.  Luckily Henry is very good about having things done to his ears - as long as he has a treat afterwards he's happy!  To use the cleaner you fill the ear with the liquid, then gently massage the ear (Henry loves this bit!).  You can than clean the external ear with cotton wool. You continue using the cleaner daily until the ear is clean, and then it can be used on alternate days for two weeks.  For dogs that get a lot of ear problems, like Henry, the cleaner can be used on a regular basis to maintain the health of the ear.  The cleaner can also be used as a follow on from prescription drops.
After just a few days Henry completely stopped scratching at his ears.  The problem this time must have been caused by his skin allergy, and the cleaner was very effective at calming this down.  We've since used it approximately once a week and Henry has so far had no more problems.  We were really impressed with this cleaner, it actually seemed to work better than a more expensive cleaner we had used in the past!
For more information about this product and others please visit www.markandchappell.com
Posted by Unknown at 19:56