Over the last few years I've been hearing so much about 'healthy bacteria' and probiotics, but I wasn't convinced that they would benefit me.  Then last month I had the chance to try OptiBac Probiotics and I've been pleasantly surprised at the results.
OptiBac produce a range of nine different probiotic supplements, all of which are of a very high quality, natural and with no added colourings, flavourings or preservatives.  The products available include 'For Bowel Calm', 'For Daily Immunity' and 'For a Flat Stomach'.  The probiotics that I tried were 'For Daily Wellbeing EXTRA Strength' which support overall digestive health, immunity and energy. 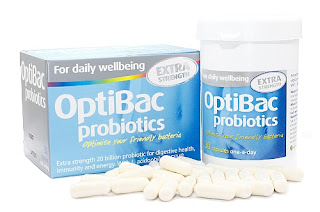 OptiBac Probiotics for Daily Wellbeing EXTRA Strength
This advanced formula from OptiBac Probiotics contains 5 well-researched probiotic strains, such as L. acidophilus and B. bifidum, in an extra strength dose of 20 billion live microorganisms per capsule.  For different reasons, people may have a severe imbalance of good and bad bacteria in the intestine.  These can include people on long-term antibiotics, people with skin conditions like eczema and acne, those with conditions such as IBS or Crohns Disease and people with busy, stressful lifestyles.  For this reason, many people like to replenish their levels of good bacteria with a high quality probiotic supplement.
My Experiences
Digestion: One of the things I hate about having to take so many different medications and painkillers are the affects they have on my stomach and digestion.  Without going into too much detail my digestion has improved so much since taking the probiotics.  My digestion over the last few years has been very erratic but after just a few weeks taking the probiotics I am much more regular, which must mean my intestines are a lot healthier.
Immunity:  It is very difficult to judge the effect the on my immune system after just a month (other than the fact that I haven't had any colds or bugs).  I believe it can only have had a good effect though; my immune system is very low so even a slight improvement would be a bonus.
Energy:  This is another area that I can't say 100% if my energy levels have improved, as due to my M.E they are very up and down anyway, and can be affected by how much I've done in previous days, how many painkillers I've had to take etc.  The only thing I can say is that I've had more 'good' than 'bad' days this month, but whether this is down to the probiotics or not is hard to say.
Skin: This is the area that I've noticed the biggest improvement.  I've had eczema since I was a baby, although it is a lot better now than during my childhood, and I often have flare-ups.  My skin seems a lot calmer now, with fewer flare-ups and sore, red patches.  It looks a lot healthier, is less dry and it feels less itchy and sore too.  I've not changed anything in my skincare regime over the last month, so I can only put the improvements down to the probiotics.
Overall:  Brilliant!  I wasn't expecting such a change so quickly.  I'd definitely recommend this product to anyone who’s health and wellbeing needs a boost.
To find out more about OptiBac's products please visit www.optibacprobiotics.co.uk
Posted by Unknown at 05:40

Email ThisBlogThis!Share to TwitterShare to FacebookShare to Pinterest
Labels: Probiotics