A dog who was rescued from a freezing lake in Ilford is still searching for a new home after spending eight months at Battersea Dogs & Cats Home.

Last January Dolly the two year old Staffordshire Bull Terrier cross was spotted in the lake in South Park, Ilford. The water would have been freezing cold, and lonely Dolly must have been scared and confused. No one knows how she ended up in the cold lake, but luckily she was pulled out and brought to Battersea by the Redbridge Dog Warden. 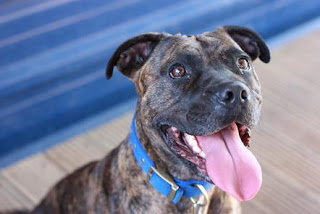 Dolly spent some time in Battersea’s Clinic while she got back to full health, and has hopefully now forgotten her ordeal, but after 250 days in kennels she has yet to find a new owner. Most dogs stay for just 48 days before finding a new home, but there is no time limit on how long they can stay at Battersea.

Rehoming and Welfare Assistant Hannah McKechnie has been caring for Dolly at Battersea, and says: “Dolly is a wonderful dog, she is really fun and giggly and loves being with people. She knows “sit” and “paw”, so she is a clever girl. People often stop and say hello to her in her kennel, but unfortunately no one has taken her home yet.”

Like 66% of the dogs arriving at Battersea, Dolly was a stray. She had been microchipped, but unfortunately when the owner on her microchip was contacted they said Dolly no longer belonged to them. If Dolly’s new owner had given the microchip provider their details, Battersea would have been able to get in touch. Instead, Dolly became one of the thousands of dogs looking for a new home at Battersea each year.

Dolly is a lively girl who can get easily overexcited so she is looking for active and experienced owners who can give her plenty of guidance and keep her busy, as well as teach her some more manners. She will reward them by being a very loving and rewarding companion.

Dolly’s favourite pastimes are walking in Battersea Park and spotting squirrels, and tucking into a rubber Kong stuffed with peanut butter. She adores tennis balls, and loves them so much she drops them in her water bowl when she has a drink, so she can quickly gobble them up when she is refreshed.

If you think you could give Dolly the loving home she deserves, please contact Battersea’s Rehoming team on 0207 627 9234 or call rehoming@battersea.org.uk
Posted by Unknown at 02:29