PetLondon is a fab company that sells high quality pet apparel and accessories that are fun for both you and your pet.  They have some fantastic dog coats, harnesses and t-shirts, including a t-shirt with a slogan that really suits Henry – ‘I love food’! I have also fallen in love with some of the pink girlie tops as well – unfortunately I don’t think Henry would appreciate a pink hoody!  What Henry did love though was an ‘Organic My Bear’ dog toy, which the nice people at PetLondon sent him to try. 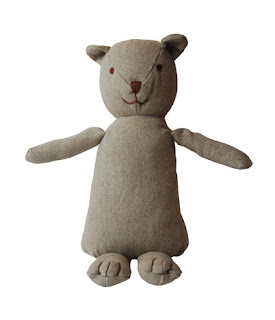 Organic My Bear
The Organic My Bear is part of PetLondon’s range of organic dog clothing and toys.  As soon as we un-wrapped the parcel we could tell this toy was very well made from high quality materials; the stitching looked better and the material was thicker than most of Henry’s other toys.  The My Bear is 100% organic, made from renewable resources and is manufactured from materials that have had no toxic substances used.  Obviously this is better for your dog as it’s hypoallergenic, and being organic it’s much better for the environment. 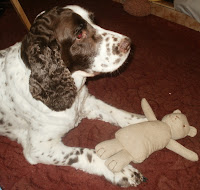 Henry usually likes fluffier toys than this so I wasn’t sure if he would like it.  He didn’t like it – he loved it!  Henry has been playing with this toy a lot over the last couple of weeks and I’m really impressed that the squeaker is still working as Henry usually kills them in a few minutes! 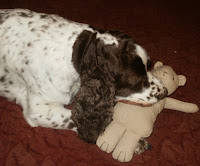 When Henry plays with soft toys he tends to hold them very tightly in his mouth for ages, which often makes puncture holes in the fabric of the toy.  But the fabric of this toy is quite thick and is still 100% intact.  Henry and Mum have given this toy a thorough testing by playing their favourite game, tug-of-war, with it several times!  This game has resulted in several of his toys being armless of headless!  But the Organic My Bear has obviously got very strong stitching as it is still in one piece, and there aren’t any broken stitches on it.
The toy was then given the ultimate test – Bandit!  We could have created our own dog toy graveyard for the amount of Henry’s toys Bandit has stolen and then destroyed in seconds!  But he played with this for about half an hour and it was completely Bandit proof.
The Organic My Bear costs £12 from PetLondon.  I initially thought this was a bit expensive as I only usually pay up to £5 for Henry’s toys.  But when you weigh up the quality of the toy and how long it’s lasted, against cheaper toys that get broken quickly and have to be thrown away and replaced, it’s actually good value.  It looks great, and you and your dog are helping the environment by going organic.  That gets a big thumbs (or paws) up from us!
For more information about PetLondon and to purchase any of their fabulous products please visit www.petlondon.net
Posted by Unknown at 11:57