Pooch and Mutt Bionic Biotic is a supplement for dogs which can help with multiple health problems and keep them looking and feeling their best.  Bionic Biotic can help with digestion, solid stools, a glossy coat and healthy skin (with no itching and redness), immunity and helps keep your dog at his or her optimum weight.  It is a concentrated powder which you sprinkle on your dog’s food.  The lovely people from Pooch and Mutt sent us a pack of Bionic Biotic to try, which we have been using for the last month or so. 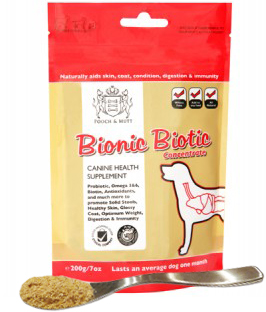 Pooch & Mutt Bionic Biotic
Bionic Biotic is suitable for all dogs and can help with so many problems that we were keen for Henry to try it.  We hoped that it would help with his skin and digestive problems which are caused by multiple allergies and intolerances.  Unfortunately we never got to find out if it worked for Henry as we couldn’t get him to eat it*, which I was quite surprised about.  We tried sprinkling just a bit over his dry food, hiding it in meat, even rolling some up in a piece of ham.  I think it was probably the powder consistency that he didn’t like, rather than the taste itself.
The Bionic Biotic contains a natural palletant so most dogs love the taste, I think it was purely the consistency of the powder he didn’t like.  Trust Henry to be fussy!  After the problems with Henry I was also expecting Bandit and Skipper to turn their noses up at it – but they ate it with no problem, and seemed to really enjoy it.  If your dog won’t eat it you can claim your money back as part of their guarantee, so you can buy with confidence.
*I have since learnt from Pooch & Mutt that the best way to get fussy dogs to eat the product is to mix with tinned tuna, and that 99% of dogs eat it with no problem.
Please don’t let Henry’s fussiness put you off, as we found it produced excellent results with Bandit.
Bandit has very dry, flaky skin which at times is very itchy for him.  After about three weeks we noticed a big difference – no dandruff and he doesn’t scratch and itch any where near as much as he did.  His coat looks fantastic – I’ve never seen him look so sleek and glossy!  As well as looking fantastic, his coat feels much softer than normal – it used to feel quite coarse and dry.
Another problem we have with Bandit is keeping him at his ideal weight – as with a lot of lurchers, he loses weight very easily.  He had to go to kennels for a few days at the beginning of September and lost a bit of weight, probably due to stress.  As soon as he got back, we started feeding him the Bionic Biotic again, and we were able to get him back to his ideal weight much easier than normal.
The supplement contains a probiotic which helps promotes the optimum levels of ‘friendly bacteria’ in the gut, which allows the digestive system to work properly. A probiotic is the reason that humans have natural yoghurt and products like Yackult.    Bandit doesn’t really have any digestive problems, but we did notice he’s less windy than normal!
Overall we found that this produced very good results in Bandit.  It’s definitely worth a trying for your dog, especially as Pooch and Mutt offer a 40g sample pack on their website for just £2.
Bionic Biotic costs £9.99 for a 200g pack from www.poochandmutt.com
Posted by Unknown at 06:11