A mixed couple of days for Henry

Henry has had some ups and downs over the last couple of days.  Yesterday he had a small operation to have a tooth extracted.  Henry's never reacted well to anaesthetic, so I was very worried about it.  Thankfully the operation went well, but he was very drowsy and upset last night.  He was wandering about like he was drunk and kept crying and whining.  He's a little better today, although he's not quite his normal self and is in some pain.  Fingers crossed he'll be alot better tomorrow.
On a happier note, Henry is featured in the current issue of Nibbling News magazine.  I must admit, I've never heard of this magazine, but it is a great read and I'd recommend it to animal lovers. 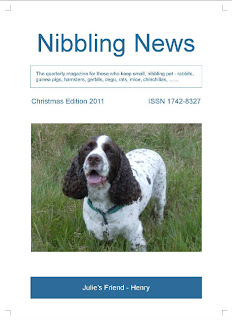 Email ThisBlogThis!Share to TwitterShare to FacebookShare to Pinterest
Labels: Henry

Thelma and Louise’s rocky road leads them home for Christmas

Mongrel Thelma and Jack Russell Terrier Louise, who are thought to be around six-years-old, were brought into Battersea Dogs & Cats Home in November. A member of the public saw them being thrown from a moving truck onto the side of the road in Oxford and took them to a nearby boarding kennels who then took them to Battersea. 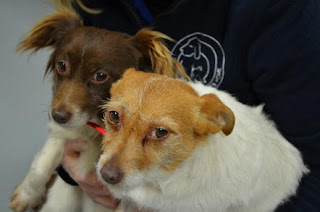 The clinic team at Battersea nursed the two bewildered dogs back to health by removing the hernias and giving them lots of fuss and attention before they were rehomed just before Christmas (19 December). The dogs share such a close bond that Battersea staff were keen for them to find a new home together. The pair, who have been renamed Tilly and Milly, have spent Christmas soaking up all the attention that they deserve with new owners Di and Andy Tamlyn and in their twilight years will be enjoying walks in Pound Wood nature reserve and curling up in front of the fire in their new home.
Di said: “We looked on the Battersea website and thought that Thelma and Louise were adorable. We didn’t plan to get two dogs, but we saw them and knew they were right for us. We’ve both had dogs as children, but for the past 17 years we’ve had two cats, but sadly they had to both be put to sleep recently. We can’t have a home without a little furry heartbeat, so we are really pleased to have found Thelma and Louise.
“Everyone knows Battersea and it seems like the best place to get a new pet. I think there are dogs out there for everyone, and people shouldn’t always just focus on the puppies, as the older dogs have also had tough lives, and need a loving home too.”
Battersea staff were looking for a special home for Thelma and Louise where they would be able to recover from their ordeal. Philip Heron, one of Battersea’s Operations Managers, said: “These two gorgeous dogs have been through so much in the last few weeks but despite this they enjoy the company of people and just want to be showered in affection. We’re so happy that they made a full recovery and that they got to spend Christmas at home with their new family, where they belong."
Posted by Unknown at 06:03 No comments:

Henry and I would like to wish all our followers a belated Happy New Year.  Personally we've had a bad end to 2011, so we're hoping 2012 will bring better things for everyone.
Our New Years Resolution is to start blogging regularly again, which I haven't been well enough to do since Dad passed away in November.  We've got lots coming up including competitions, some great product reviews and lots of rescue news so stay tuned!

WetnoseAnimal Aid is currently running a Christmas Pet Photo Competition and you still have time to enter.
Catch your pet dog playing in the snow, swimming; ride in the car, or cat pulling a funny face, climbing over a fence, pony laughing or jumping, parrot pushing a toy trolley. 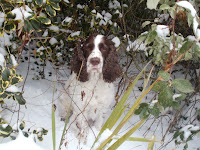 Whatever trick or funny moment you catch on camera send to Wetnose Animal Aid before the 31.1.2012.
2 lucky winners will receive a luxury pet hampers and toys with first and second rosettes with pictures on our website.
Send your photo to: Wetnose Animal Aid, Newgate Lodge, Newgate, Kirby Cane, Norfolk, NR35 2PP before the 31st January 2012. You can also enter by email.  Find more details here. 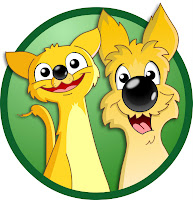 Good luck!
Posted by Unknown at 02:04 No comments:

Email ThisBlogThis!Share to TwitterShare to FacebookShare to Pinterest
Labels: competition

Get knitting to help rescued cats keep warm this winter

Wetnose Animal Aid are asking for help from knitting fans this winter. Please help them if you can.  Here is their appeal: If you have some spare wool and can make some lovely cat blankets please send some blankets to us so we can to send to catteries here in the UK.  Many cattery people often help and feed feral cats at night too so they would be very grateful for some snuggly blankets to keep them warm during the cold weather.
Wetnose Animal Aid is aware of how many catteries are now full of unwanted cats, elderly cats or cats that have health problems and are no longer wanted, so let’s help our cats nap in warmth this year.
Send your parcels to Wetnose Animal Aid Ltd, Newgate Lodge, Newgate, Kirby Cane, Norfolk, NR35 2PP and we'll do the rest.  We'll update our facebook and website with details and news.
Donations are always very welcome too.
www.wetnoseanimalaid.com
Posted by Unknown at 08:55 1 comment: