Singer and reality TV star Peter Andre has a new love in his life after a visit to Battersea Dogs & Cats Home on Saturday.

The media star gave a second chance to a five month old Pug named Charlie after it arrived at the world famous animal charity because its owners were moving abroad. 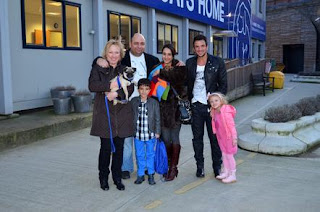 The prolific Tweeter posted a photo of his new pooch on Twitter on Saturday to over a million and a half followers saying: “Welcome Charlie Pug :))) we love him. He is a dude.”

Animal lover Andre hosted Battersea Dogs & Cats Home’s annual Collars & Coats gala ball last year which helps raise vital funds for the charity. During the event he was introduced to some of the 450 dogs that Battersea looks after at any one time.

Claire Horton, Battersea’s Chief Executive says: “Charlie’s really landed on his paws in his new home. Having Peter’s support means so much and we are thrilled he’s able to offer such a fantastic home to a Battersea dog. I know Charlie will have lots of fun with his new family, and we may even see him making an appearance on Peter’s ITV2 show!”

Last year Battersea Dogs & Cats Home cared for over 8,000 lost and unwanted dogs and cats. Battersea rehomes all over the UK. If you can offer a new start to a deserving dog or cat please contact Battersea on 020 7622 3626 or visit www.battersea.org.uk.
Posted by Unknown at 06:19