Gunning for a new home

A footie-mad dog called Gunner is hoping to score a new home with a family of Arsenal fans, after being relegated from a Premier League prized pet to a homeless underdog. 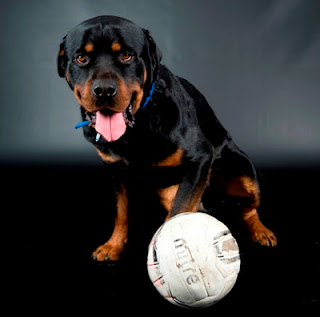 Gunner is a three to five year old Rottweiler at Battersea Dogs & Cats Home Brands Hatch who loves playing with his football, and has skills to rival Robin van Persie. While he hasn’t quite mastered the volley, he’s already showing high promise with a nifty ‘sit’ and ‘paw’, and is a pro dribbler.

Gunner moved into Battersea Dogs & Cats Home’s Kent-based site in January, after his owner was unable to keep him. Any family who are a man down and are looking to boost their team would be lucky to have Gunner, as he’s a friendly and social boy, who loves being around new people.

Battersea Brands Hatch’s Rehoming & Welfare Assistant Tanya Madden explains: “Gunner would love to live with a family of football fans, especially if he could chill out with them and watch the big games on TV. As he’s a Gunner we can imagine him suiting Arsenal fans, but he’s a bit of a fair weather fan and would happily switch his allegiance to another team. He can live with teenage children, so I’m sure he’d enjoy going along to watch them have a kick-about or cheer on the local team on a Saturday.”

Gunner is now living the top-flight lifestyle in a foster home to give him a break from kennels, and enjoys long walks, tasty meals and a constant supply of cuddles.

Tanya adds: “Gunner does have a bit of a worried side to him but he is a real champion and he’s very popular here at Battersea. Gunner isn’t fussed by scoring a wonder goal or perfecting his tiki-taka, he just wants to find a new home.”

If you can give Gunner a place in your team, please contact Battersea Dogs & Cats Home Brands Hatch on 01474 875106 or email bbh.rehomers@battersea.org.uk
Posted by Unknown at 04:03 No comments:

Last year Henry was lucky enough to try the Antos Cerea range of dog chews, which he loved.  You can see his review here.  Now it's Skipper and Bandit's turn to try some tasty Antos snacks.  They had the lovely job of tasting some of the Antos Chicken D'Light snacks.

The Chicken D'Light treats are made from 100% chicken breast (apart from the Duck Chicken D'Light which is made from 100% Duck breast). These snacks are 100% natural, a good source of protein and are low in fat. There are no artificial flavourings, colourings or preservatives and each 100g pack is re-sealable, ensuring the meat is kept fresh. 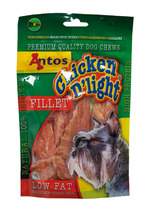 They come in five different varieties - Fillet, Steak, Duck, Sticks and Steak &  Cheese.  Skipper and Bandit got to try the Chicken Fillet and the Duck varieties.  The fillet packet contained large dried chicken fillets, whilst the duck packet had smaller strips.

These must smell really tasty as they dogs were very keen to find out what was in the packets!  They tried the duck variety first which were long strips and were gobbled up quickly, especially by Bandit!  They made a great quick treat to reward good behaviour.  They are low in fat as well so they are ideal for dogs who are watching their weight. 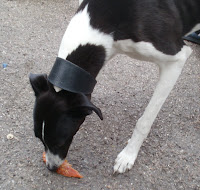 Next we tried the chicken fillets, which were larger than the duck variety.  Bandit, being the greedy one of the two, tucked into his straight away and really enjoyed it.  Skipper can be very fussy so when he initially just sniffed and licked the chicken fillet I thought he wasn't going to like it.  But he was soon taking the treat under a chair (so Bandit couldn't steal it!) and tucking in.  He must have enjoyed it too as he kept trying to pinch more out of the packet!

My overall impression was that these were good quality treats that the dogs really enjoyed.  Skipper and Bandit are used to having biscuits and chews so it was nice to give them a different type of treat, and it was even better that they were natural and so good for them.

You will find Antos' range of dog snacks in many pet shops and garden centres.  They are also available from many online stores, a list of which can be found at www.antosuk.com
Posted by Unknown at 03:53 No comments: