We'd like to introduce you all to Billy, the new member of our family! 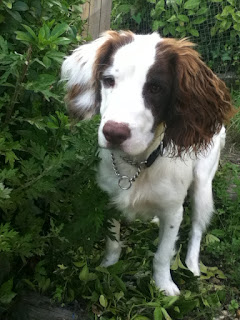 He was known as 'Gilly', but we thought 'Billy' suited him better so we decided to change his name.  We adopted him from the same rescue centre as we got Henry from.  He is approximately 7 or 8 months old and was no longer wanted by his previous family.  He had been left in his crate for most of his life, and had never been on a lead.  Amazingly though, he is a confident little chap, nothing seems to faze him.  We are working hard on his training and taking him to weekly classes.

Billy has settled in well and loves Henry to bits.  I am sure I will be sharing lots of photos with you over the coming weeks and months.
Posted by Unknown at 11:34