Battersea Dogs & Cats Home has celebrated Team GB tennis player Andy Murray’s Gold medal victory in the Men’s Singles by naming one of its homeless dogs after the hero from Dunblane. 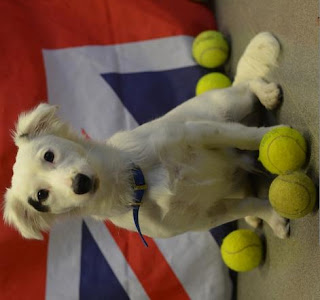 For some reason this photo keeps coming out sideways - sorry!

Jack Russell cross Murray is now hoping some of his namesake’s success will rub off on him as he searches for a new home. The eight month old puppy was dumped on a doorstep in Bexley, London, before being brought to Battersea. Like the tennis giant, he is confident, energetic and loves tennis balls.
Rehoming and Welfare Team Leader Laura Weekley explains: “Murray is the perfect name for this pup. Like Andy, he is very intelligent and clearly has his eyes on the prize, as he wants to bag a new home. Here at Battersea everyone, including our dogs and cats, is right behind Team GB and we hope that naming some of our animals after the team will help spur them on to win even more medals.”

Andy Murray is one of Battersea’s supporters, and visited the charity in July, following the Wimbledon Championships. To wish him luck ahead of the Men’s Singles final on Sunday, Battersea tweeted a photo to his dog Maggie May, showing Battersea dog Jessy the Wire Fox Terrier holding a good luck message for the player.

Murray the Jack Russell is one of 16 dogs and cats at Battersea named after Team GB Olympic gold medal champions. They include Staffies Mo, Ben and Jessica and Golden Retriever Rutherford.
Battersea has already had a taste of the excitement surrounding the Olympics, after the Flame made a special visit to the Home last month. Former England player Michael Owen carried it through Battersea, accompanied by Rory the Staffie, and they were watched by a doggy Guard of Honour of over 50 dogs.
Posted by Unknown at 12:04