Last week I told you about Henry taking part in Pedigree's Joint Care+ Challenge, to see if the tasty treats could help with his mobility and joint stiffness, so we thought we'd update you all with his progress.  He's only been having the treats for just over a week so we weren't expecting to notice any improvement yet, to be honest we were pretty sceptical about them helping at all - but we were wrong!

Before the trial Henry was really slow and ploddy, and couldn't get up stairs or steps very easily.  He could only manage short walks and didn't enjoy his outings as much as he used to.  This week Henry has been on a trip to the local woods, something he's not been able to enjoy for a while.  He was noticeably faster, trotting instead of plodding and explored areas off of the path which he had stopped doing.  While he's not exactly a speedy puppy again, there has been a definite improvement -  amazing for such a short time frame!  Henry has also started playing more with his toys again and seems happier in himself. Of course I can't say for sure that this is due to Pedigree Joint Care+, but it does seem like a big coincidence.

This is Henry exploring the woods with Billy on Saturday. 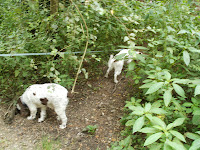 Over the years Henry has learnt a few tricks, but he's been unable to do many of them recently because he was no longer as agile.  We tried an experiment yesterday and asked him to do a 'High 5' in return for a Joint Care+ stick (sensibly he will refuse to do anything if he feels unable or is too stiff) and he did it with ease! So today we decided to video him showing you just what he will do for his daily Joint Care+ stick, and that there is plenty of life left in the old dog yet!!


If Henry has improved this much already we can't wait to see what will happen next week! Check back next week to find out...
Posted by Unknown at 13:15