It's time again for our weekly progress report from Henry's Pedigree Joint Care+ challenge!  Well, the first thing we wish to share with you is Henry's day out at a dog show which was held in our nearest town at the weekend.  We weren't expecting to win anything, but it was only down the road and was in aid of Devon Air Ambulance so we thought we'd go along and support them.  I was totally gobsmacked when Henry came away with eight rosettes, including Best in Show!!!!  I was especially pleased when the judge (who is a vet) commented about how well he moved for his age and this was one of the reasons she had picked him as the Best in Show winner.  It was great to hear this, but I doubt she would have said it three weeks ago as he was so stiff in his back legs. Henry has progressed so well and I really think it is due to the Joint Care+ sticks he is enjoying daily.  So  I guess we have Pedigree Joint Care+ to thank for his big win! 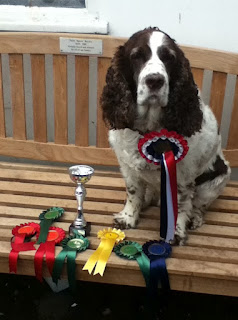 This week Pedigree have challenged us to see if Henry can 'play again' now that his mobility has improved.  He's never been a dog that has played alot as he had obviously never played with his previous owners before we rescued him, but he used to enjoy chasing tennis balls around the park.  Over the last few months though he has shown little interest in toys, and rarely played with them, but over the last week or so he has started playing with them again.

On our visit to the park today we took along a tennis ball and the ball thrower Pedigree kindly sent us (they also sent us some rubber balls to go with it, but Henry doesn't like hard toys so he gave them to Bandit and Skipper).  We were really surprised and happy to see Henry running around after his ball, and really enjoying himself.  We haven't seen him this active for a long time, it was wonderful to see him back to his old self.  I tried to take a video of him at the park, it's come out a bit blurry, but you can just about see how well he's moving!


Some photos from the park today. 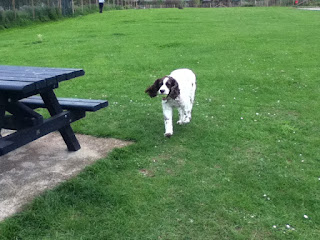 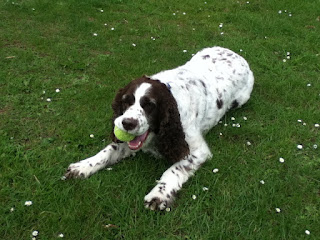 Henry has also started to enjoy playing with his favourite duck toy again!  Thanks Pedigree for helping Henry to 'play again'!


As you can probably tell from the photos and videos, Henry is overweight, which is very hard to deal with as he has to have regular steroid injections for severe allergies that affect his ears and skin.  It's been even harder to cope with recently as he's not been able to exercise much.  This is now changing as he's started asking to go for longer walks, and not wanting to turn around to go home.  His enthusiasm and attitude have noticeably improved since he started the Joint Care+ challenge.  Another plus point is that Henry had lost half a kilo when he had his latest vet check this week, thanks to his increased levels of exercise!


We are so impressed with the progress Henry has made so far, we look forward to next weeks challenge from Pedigree.
Posted by Unknown at 10:24