Cheese-loving Gromit is desperately seeking someone special to spend the rest of his life with. And as much as he has had a brie-ze of a time at the rehoming centre run by animal charity Blue Cross in Burford, it’s now beginning to grate on him. 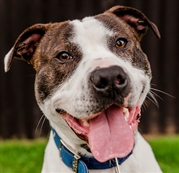 Staff were so impressed with his good nature and behaviour that Gromit has already made a media appearance and he will be on video and in photographs for a magazine feature in the autumn. The 14-month-old staffie has been a natural media star and his intelligence meant he was handpicked for his reliability.

Hannah Wiltshire, rehoming supervisor at the small animals unit at Burford, said: “Everyone knows Gromit in the films loves cheese. When our Gromit the staffie arrived he was feeling a bit sorry for himself but in a short space of time, with some medical treatment and the odd treat, he perked up nicely. Gromit has been amazingly quick to pick up new skills in training. He has been here for nearly two months and as much as we love Gromit, "when you Gouda go, you Gouda go.”

Jenny Woolliams, animal behaviourist at Blue Cross who was his handler during the recent filming session, said: “Gromit is such a lovely boy. He has been a pleasure to train as he is great around other dogs and fantastic with people. Surely someone can give Gromit a big slice of their life and invite him to join their family?”

Gromit is looking for a new home with plenty of exercise and mental stimulation. He loves long walks and feta-ching his ball. He could live with a suitably matched dog but not a cat or other small animals due to his playful nature. He could live with children who are confident around a lively, bouncy young boy like Gromit, subject to introductions at the centre.

As Wallace would say: “E-dam by gum. Can you help this handsome one?”