Help Honey the hedgehog raise money in her Hoggy Wheelathon!

My friend is currently holding an unusual fundraiser to raise funds for Forever Hogs Rescue.  One of her African Pygmy Hedgehogs, Honey, will be taking part in a wheelathon - just guess how far she will run in 7 nights!  Guesses are £1 each or you can sponsor Honey if you prefer. You can also some buy some lovely bracelets and necklaces, again all money goes to the rescue.  There are some great prizes to be won, so why not give it a go.  The fundraiser is being held on Facebook here. 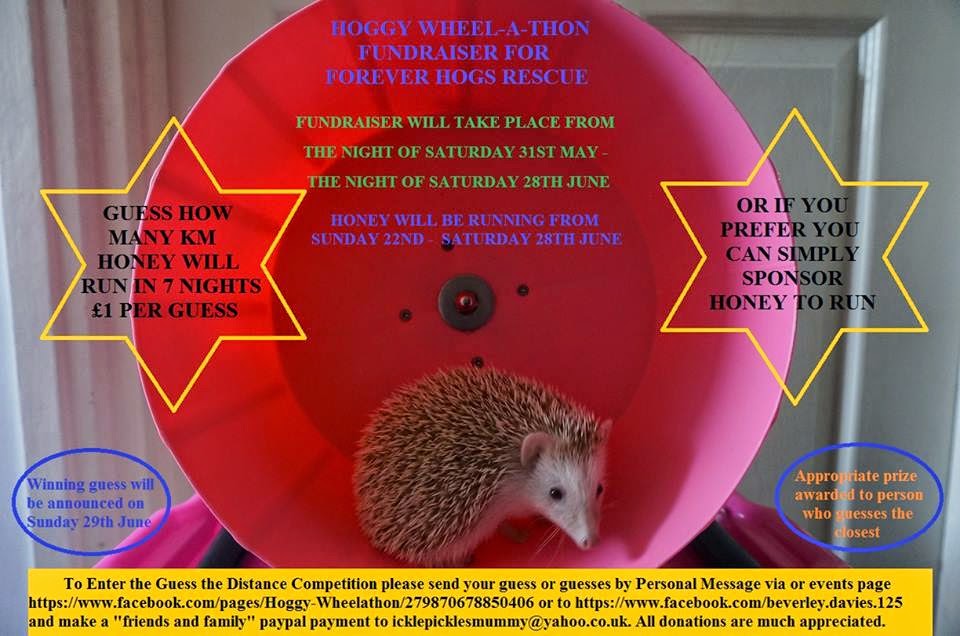 About Honey the hedgehog (written by her owner Beverley Davies) 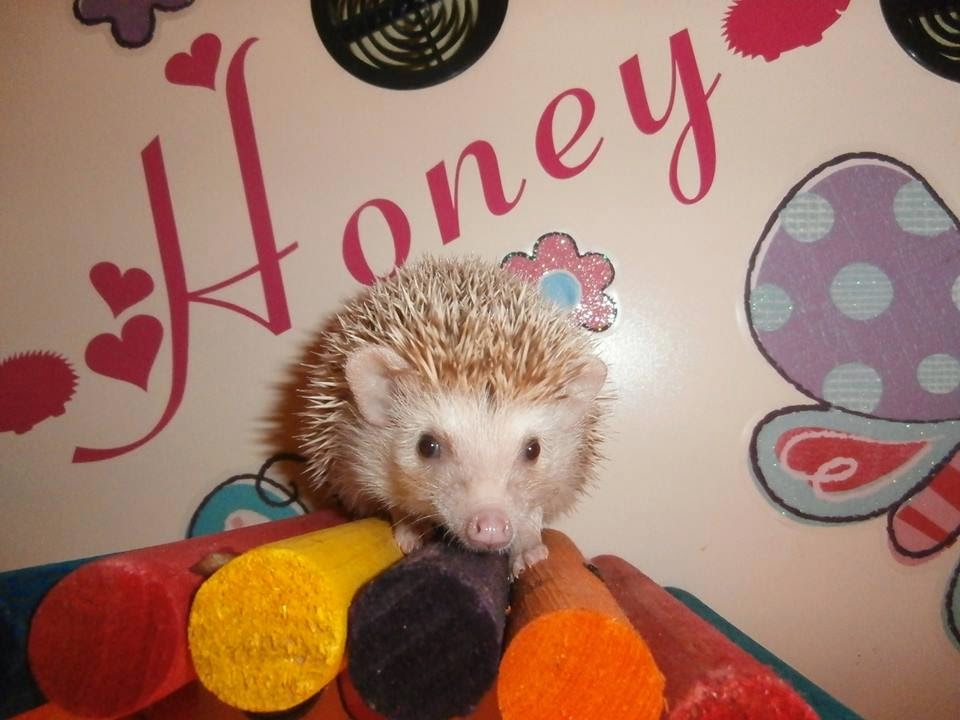 Things don't always go to plan when breeding animals and that was the case when my little African Pygmy Hedgehog Honey was born.
Mum Lola gave birth to two very cute babies on 31st January 2014. Her breeders were delighted at their safe arrival and couldn't wait to meet them once they were 2 weeks old and old enough to be looked at more closely. However, 9 days after the babies were born something very sad and shocking happened - Lola suddenly passed away with the babies still feeding from her. Everyone was devastated. Nobody knew why Lola had died but their priority now had to be the babies and how they could try to save their little lives. At 9 days old their lives really did hang in the balance and nobody thought they would survive. They were tiny and orphaned.

They considered hand rearing them but this isn't always the best for a good outcome for the babies. Another of the females had recently also had a litter of 2 babies so it was decided to add Lola's 2 babies to Alice's and see if she would accept them and feed them - amazingly she did! The babies grew from strength to strength and when they started to leave the nest by themselves to investigate everyone started to believe that they might actually survive.

At 5 weeks old it was mentioned that they would be starting to look for a home for the female. They said that they were looking for a very special home for their special girl. Having followed the story of how these babies had been fighting for their little lives I was drawn to her. I spoke with the breeder, who is also the breeder of my other APH Herbie, and they agreed to me having her, I was delighted. At this point I was warned that it was still early days and they wanted to be 100% sure that she was ok so it might be a few weeks before I could have her. I expected to be waiting a good while.

At six weeks old the babies are taken away from the mum to prepare them for moving to their new homes. All 4 babies were feeding well and in fact the Lola's babies were as big as the other 2 in the litter that were a few days older. At 7 weeks old I was told I could bring her home! I couldn't believe it!

I named her Honey and on 23rd March I brought her home. Honey is such a cutie and so full of life. In fact she never stops running, she is totally crazy. She runs so fast and hardly sits still. I call her my wild child as she is such a livewire. Its like she is saying "look at me, I survived!"

Little Orphan Honey is my little fighter and she is adorable.
Posted by Unknown at 10:00