Jessie is a 5 year old beautiful Mastiff cross Great Dane who has sadly had a tough life.  She is a large dog who sadly appealed to the wrong kind of person who saw her as a ‘status’ dog and a way of making money.  Kept in a lock-up shed behind a community centre, Jessie was bred from but not given proper after care – abused and neglected she didn’t know what love or care was like.

Her owner was sent to prison (for unrelated offences) but he made no arrangements to have Jessie looked after. Neighbours alerted the police and dog warden after hearing pitiful howling and crying coming from the shed, who broke in and rescued her.  The sight was sad to see – a large beautiful dog that was painfully thin and just so grateful to see human company. She was taken to a rescue centre where she received emergency vet treatment for a vaginal infection probably caused by lack of care after she had a litter of puppies.  She had cigarette burns on her legs and ears, her nose had been slashed and by the way she reacted to raised hands she had obviously suffered badly at the hands of her owner.  Her eyes were the saddest I have ever seen, I just cannot imagine what she had seen and been though. 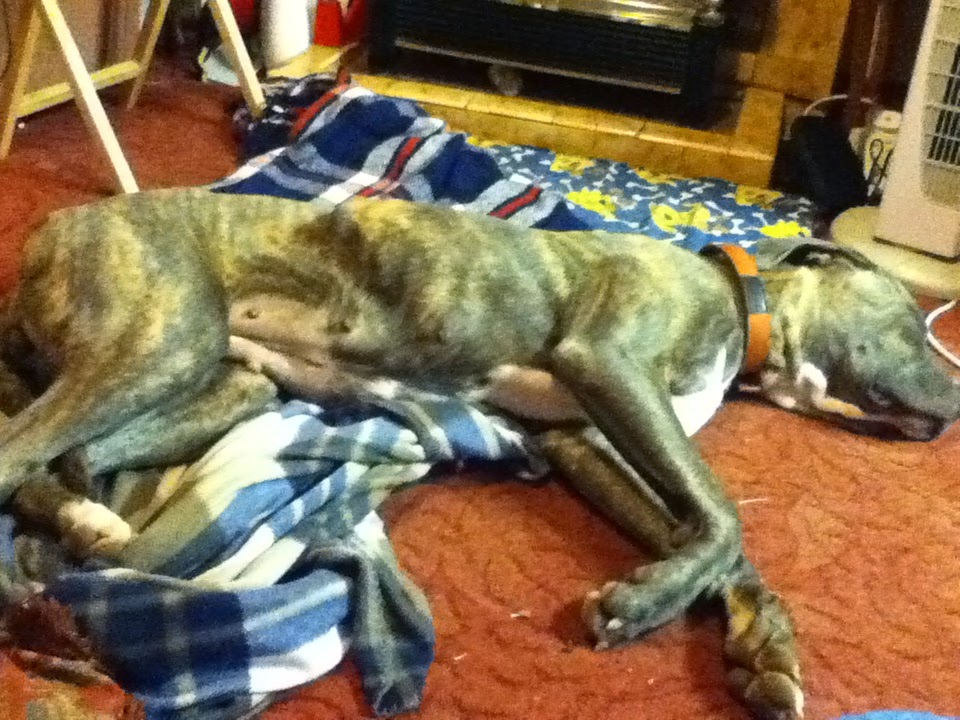 Jessie when she arrived with us as a foster dog.  She had already put  on weight at the rescue centre, but was still painfully thin. 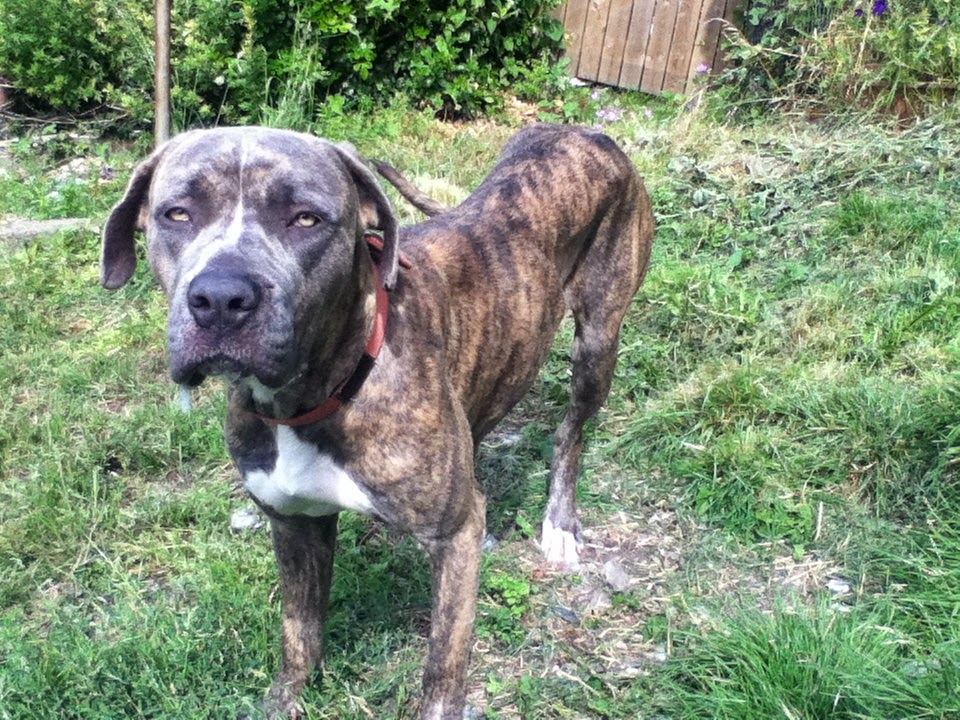 My mum originally fostered her, but as soon as I saw her eyes I knew I couldn’t bear to part with her. I have a lot of health problems, including fibromyalgia which causes me chronic muscle and joint pain, M.E, diabetes, depression and anxiety problems. Six years ago I was at rock bottom and was pulled out of a severe depression by my spaniel, Henry, and he has helped me a lot over the years. However since my Dad died two years ago Henry has attached himself to mum and I had been feeling very lonely again. I soon as I met Jessie I knew that loneliness was nothing compared to what she had suffered. The depression had begun sucking me back into a dark and dangerous place but I pulled myself out of it as I knew I had to help this poor dog who had suffered at the hands of man.

When she first arrived in our home, she had shut down and was very withdrawn, but gradually her health improved and her true personality began to show. She had to put on over 10kg as she was very underweight, and she was treated for infections and cuts and burns. Put the most important treatment we gave her was love.

We have now had Jessie for almost two years and I have never known such a loving, loyal and trusting dog. Despite everything she has been through, she loves and trusts everyone.  When I am in pain (which is most of the time), Jessie instinctively knows it and won’t leave my side. She cuddles up next to me and won’t leave me.  If I am upset or crying, she licks away my tears.  My spaniel has always been able to tell me when my diabetic sugar levels drop, and Jessie seems to have copied him. She can now alert me if it drops to a dangerous level – a wonderful achievement I think.  When I am out on my mobility scooter, she trots proudly by my side. If I am getting anxious, she knows how to calm me down to prevent a panic attack.  Jessie sleeps on my bed and is there for me 24/7. 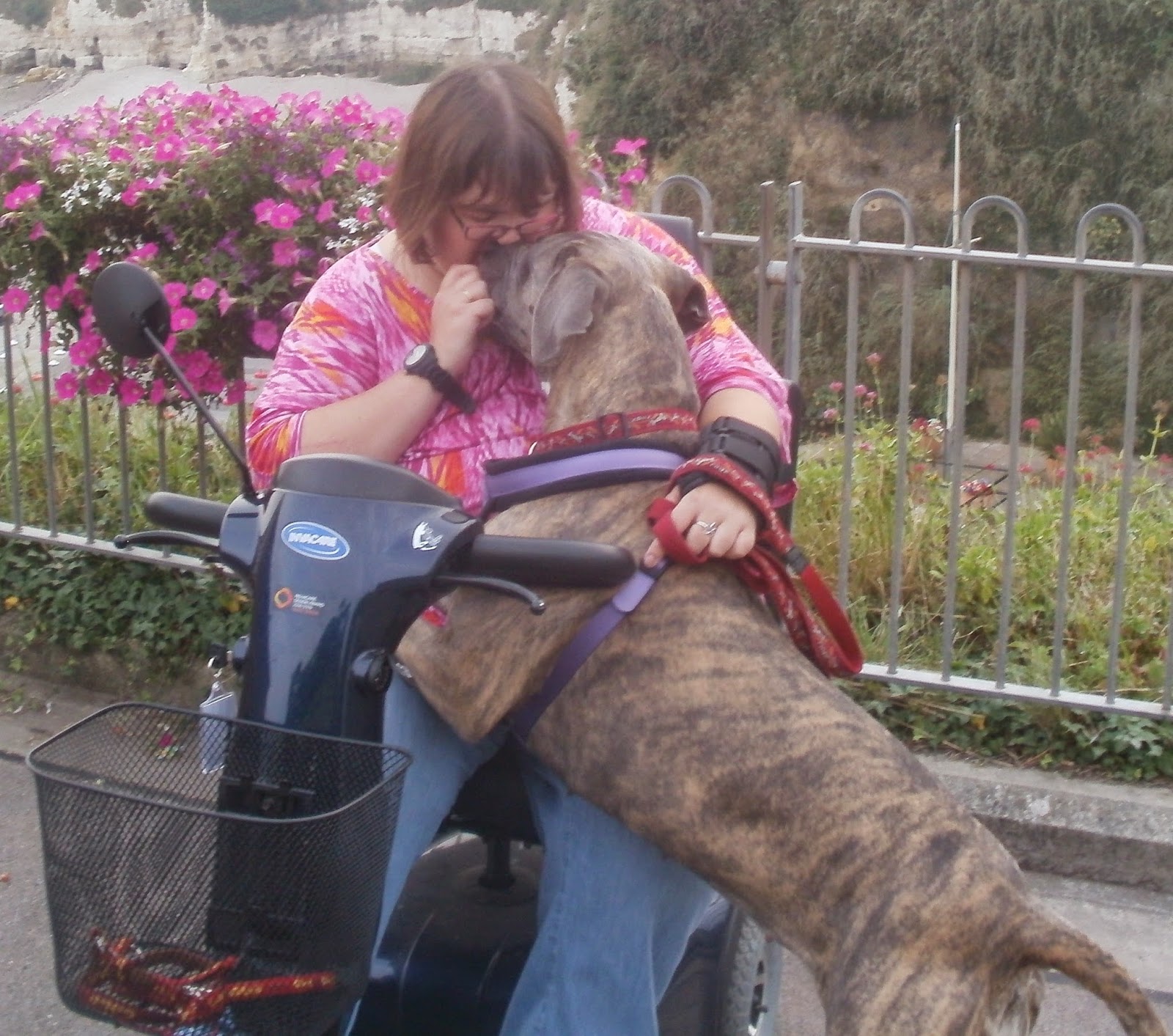 For years my mobility has been poor and I’ve had to use a scooter or walking frame. However over the last few months my pain levels and mobility have worsened and I am now at the stage where I am confined to my wheelchair most of the time, even indoors. I have found this incredibly hard to deal with, but Jessie has really helped me and has kept me going. She is gentle and doesn’t pull me, and has even leaned into me to steady me when I’ve stumbled.

For everything she has been through she is an amazingly kind, trusting and well-adjusted dog.  She is happy in any environment – be it a busy dog show, bustling pub or a busy town centre.

I was very proud of Jessie in March 2014 as she made it to Crufts! She was a finalist in the Friends for Life competition and appeared live on Channel 4. She behaved amazingly well in such a busy environment, and I hope she showed a few people that rescue dogs like her make great pets. 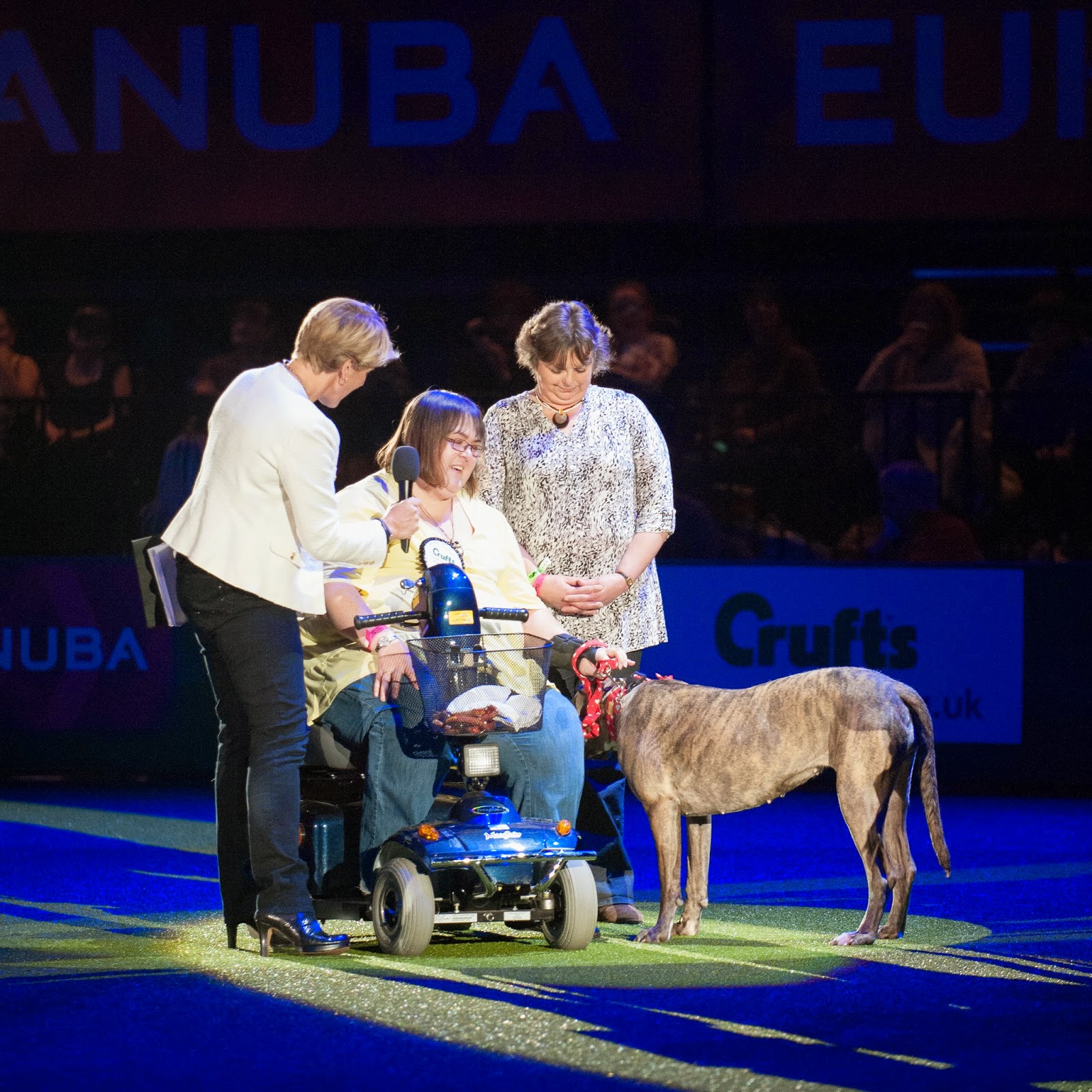 Being interviewed by Clare Balding live on Channel 4! 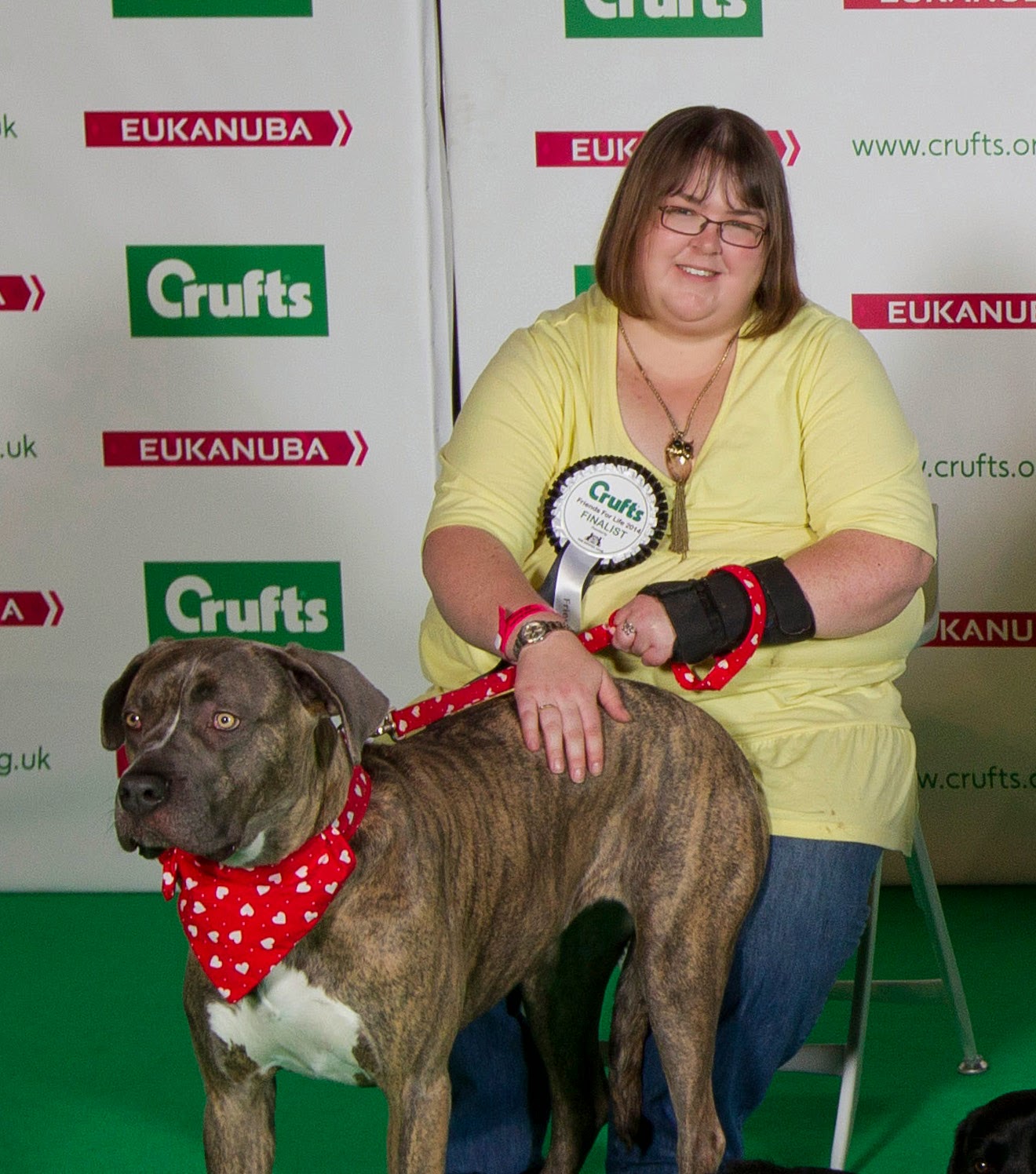 She also acts as ‘ears’ for my other dog Henry who has gone deaf – she tells him very important things like when a packet of treats is being rustled! If Henry is asleep and we want to wake him up, we ask Jessie if she wants some ham or a biscuit. She then gets up and nudges Henry. He sees that she is excited and they both get up to have their treat. When mum comes home from work, she wakes Henry up and they both go to the door together. He relies on her a lot and is much more confident when he has Jessie with him.

Jessie is a true ambassador for large rescue dogs.  Some people are initially frightened of her due to her size and the image people have of dogs like her as ‘status’ dogs, but after just a few seconds in her company they realise she is a big softy who is gentle and loving with everyone she meets, young and old.  We put bright, fun bandanas on her to try and soften her appearance – she gets many admiring glances and smiles when she is trotting next to me on my mobility scooter.  When I look at the photos I took of her when she first arrived as a walking skeleton, I hardly recognise my beautiful girl, and it brings tears to my eyes.  Jessie truly is a special rescue dog who has overcome unbearable cruelty in her life and makes my life brighter - I am so proud of her. 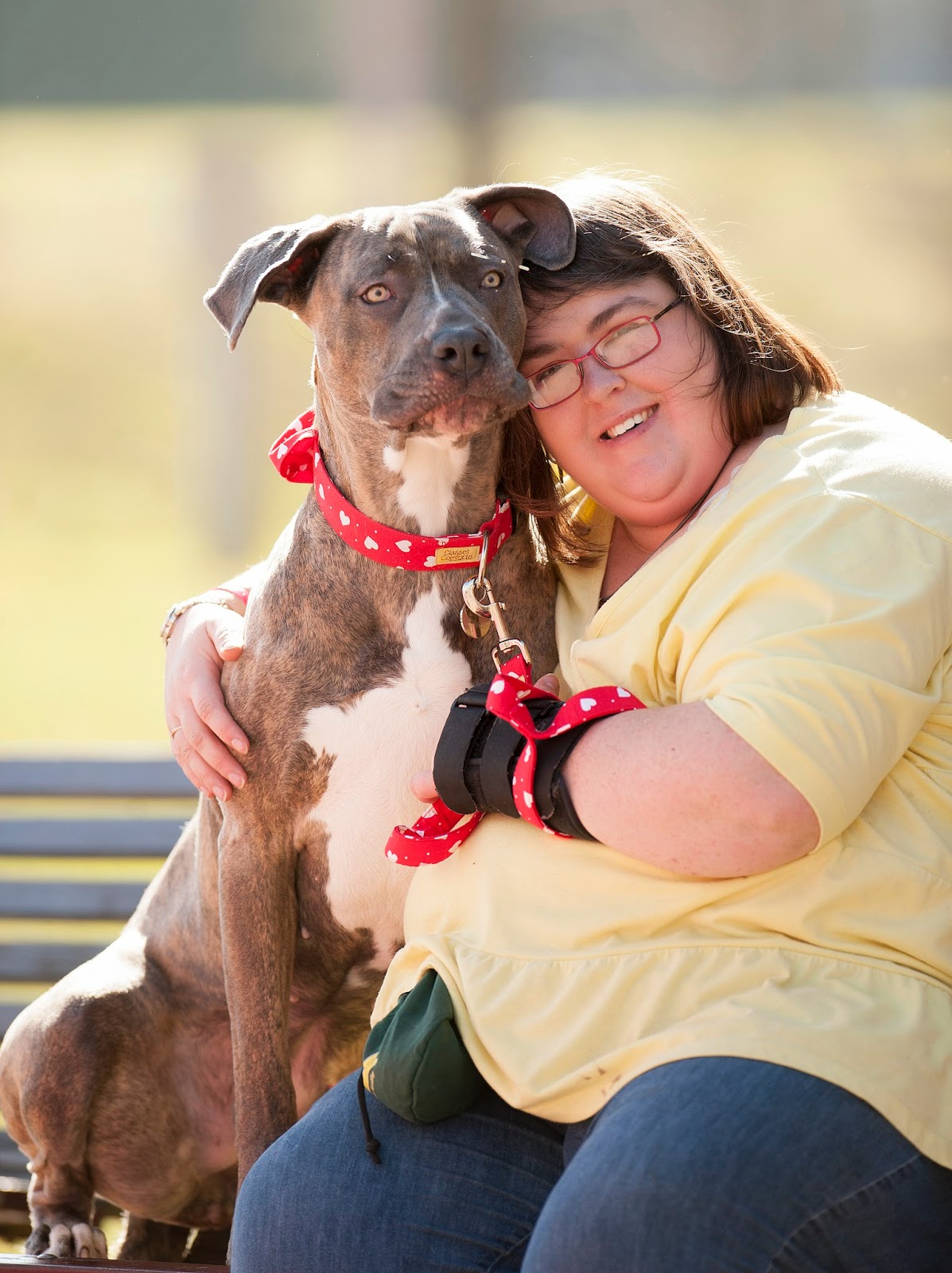