As soon as these treats popped through our letterbox the dogs were interested in them. My assistance dog Elgin brought me the post as usual - with our pet beagle Cherry chasing after him trying to grab the package with the treats! Luckily they made it to me in one piece! 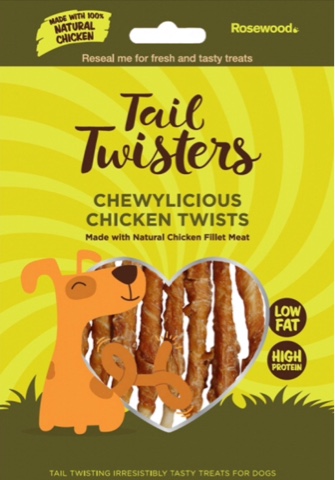 Rosewood Tail Twister treats are available from retailers nationwide, and from many websites including Amazon. 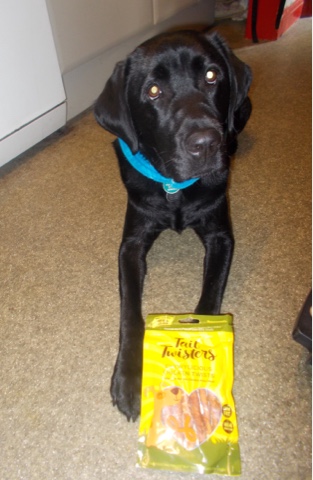 Elgin with the packet of Tail Twisters treats.

As soon as I opened these treats, and saw how much real chicken was on them I knew that Elgin and Cherry would love them. So I also recruited my brother's lurcher, Skipper, to try the chicken twist chews because he is extremely fussy - if Skipper likes a treat then you know they are very tasty! Skipper tucked into the chew straight away (instead of playing with it while deciding whether to eat it or not) and he seemed to really enjoy it. Normally he wouldn't eat a rawhide chew, but obviously the dried chicken made it much more tempting to him.

Skipper did make a bit of a mess while eating the chew, with pieces of the chicken getting everywhere, but this didn't really happen with the other dogs so it must have been the way he ate it. The other dogs were very happy to help clear up Skipper's mess though! 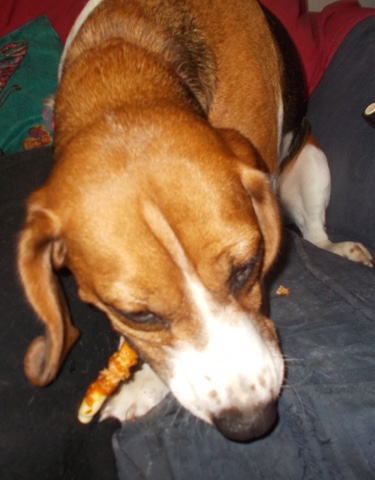 The chews didn't last as long as I thought they would. Cherry, Skipper and my brother's other lurcher ,Bandit, ate theirs in two to three minutes. Elgin demolished his in about thirty seconds! But Elgin is a typical Labrador and all food gets hoovered up very quickly so it wasn't really a surprise. They all really enjoyed the chews and asked for more.

I liked that these contained a lot of real dried chicken as it made them really appealing to even our fussiest dog. These treats are also low in fat too, which is important to me as both Elgin and Cherry are prone to putting on weight. I'd definitely purchase these treats if I saw them in our local pet shop as they were very popular with all four dogs that tried them.

I've asked the dogs their opinion and they'd all give these treats five out of five stars.

Disclaimer - We received a free packet of treats for signing up to Rosewood's newsletter. The dogs liked them so much that we decided to post a review.
Posted by Unknown at 12:08